Does NYPD Internal Affairs have the Answer to Why Dr. Fagelman's Receptionist Deilta Hooks is so Confident She can Get away with Assault Battery and a false Cross complaint?

Does NYPD Internal Affairs have the Answer to Why Dr. Fagelman's Receptionist Deilta Hooks is so Confident She can Get away with Assault Battery and a false Cross complaint?

some interesting things to see....

You can see Delita Hooks clearly holding open the door rather than closing it to begin the assault because she wanted to hurt me and hurt me bad so she takes off her shoes to run and punch me in the eye as hard as she could kind of like Internal Affairs Capt Wright did to his NYPD Sgt gal pal except I was a patient and just had a $430 medical procedure, my arm numb, holding 2 bags on my left shoulder and my iphone in my right hand.

Below also note the heavy woman in the blue medical outfit leaning against the wall.

Delita Hooks seems to be looking at her before she turns to rush at me.

6 seconds in to the assault video the woman in blue is leaning against the wall as not much is happening until Delita Hooks rushes at me.

Than she runs and is joined by other women that yell No, Dee don't do it. 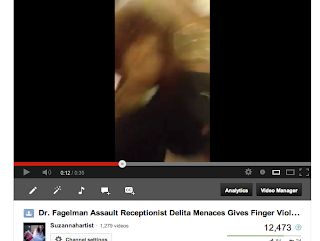 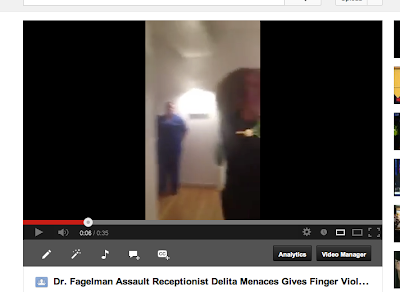 The woman in blue got between me and Delita Hooks after I gently took Delita Hooks to the ground,
as gentle as I could considering that she was running at me punching me, grabbing my hair.

The woman dressed in blue turned to me and said let go of her which I found shocking!
I was bent over to like a bridge with Delita Hooks causing more damage to my cervical spine pulling on my hair.

I raised my hands and said I am not touching her.

Delita Hooks would not let go of me just like the irrational violent assault of her running, punching and kicking me yet Delita Hooks lied and blamed me.

Delita Hooks tried kicking me but kicked the woman in blue who said ouch.

Than delita hooks got her put up against my vagina but didn't hurt me because as she was pulling my hair wrenching my neck I continued to try and get away from this violent maniac that acted like she was on steroids.   Insane.  I was told the woman in the video all lied and blamed me not knowing I had the video.

For 7 months I was harassed on my YouTube channel and the first was Oct 4th the same day Det. John Vergona contacted me and I alerted him.

Only very recently has the cyber harassment stopped....I wonder why.

8 months no arrest.  I am told Delita Hooks has medical reports interesting because my MD demanded she be fired but instead Delita Hooks went right back to her desk.

So may I wonder out loud did she fake medical reports the way she was confident she could walk in to the First Precinct and file a false cross complaint and get away with it?

So far for 8 months she has gotten away with it so excuse me if I wonder if Dr. Fagelman called 1-800 NYPD PBA IAB fixit?

Was it my politics or the NYPD fixed this as a favor?

I just want to know because after 8 months now no arrest and I was violently coerced in my opinion in
to dropping charges against my will by Det. John Vergona.  Doesn't Internal Affairs want to investigate why I would drop charges with this video evidence and medical reports I had?

So traumatized and I can't help but wonder what is going on here.

Dr. Fagelman lives and works in the First Precinct and is by IAB offices at 1 Police Plaza and Hudson Street.

Why hasn't IAB yet?

By the way forging medical reports is a Federal offense.

Threatening someone with bodily harm, running and punching them in the eye is a crime and a false cross complaint is a crime.

The video proves Delita Hooks absolutely threatened me with bodily harm and repeatedly assaulted me when she could have closed the door.

When you hear me tell her don't touch me that is assault she goes on to touch me again and again like a sicko predator and oh so confident she can get away with it.

Why was and is Delita Hooks so confident she can get away with assault, battery and false cross complaint.

Maybe Internal Affairs has the answer?

Posted by Suzannah B. Troy artist at 6:43 AM