Internal Affairs Cannot police the police NYPD Retired Det Vergona Facebook Friends Expose IAB Corruption and another motive for facebook friends Det Andy Dwyer, Eugene Schatz and I can't believe it shocked Det Tommy Moran facebook friends so was he party to it the crimes of coercion lying in police reports too? 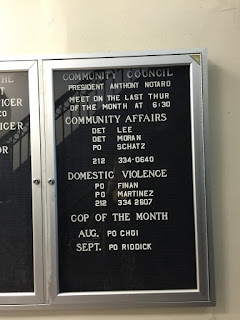 I mentioned this in the first federal lawsuit but didn't connect until Facebook and it's not in the second lawsuit  although I hope to alert the judge and I will tell corporate counsel's lawyer.

The  first complain I ever made against an officer was  against Vergona' and Tommy's friend Eugene Schatz --  there openly brazenly friends with no fear of accountability because Internal Affairs Drugs police the police and isn't bothering to --  detective and it wire I have no idea what you look like because he's a coward and a criminal just like detective  john Vergona.

Do  I have to fear for any more violent threats and kind of retaliation from them and even more of their friends ?

Here is video - shocked - Vergona's facebook page and 01 board with Moran and Schatz puts together another motive for Vergona's  violent threats telling me to keep my head down essentially to shut up --  I thought Tommy Moran was a good guy - he even talked to me about his family but now was he party to coercion retaliation their goal to teach me a lesson and due a favor for Schatz who  i've been verbally aggressive yelling at me even using his car as I contacted Intrrnal affairs about his wrongdoing inappropriate behavior with about  his wrongdoing inappropriate behavior with the Mercer hotel .

NYPD Retired John Vergona Facebook face links Coercion lying police reports w/ 3 NYPD PO Det Andy Dwyer my attacker's corrupt Cop, Eugene Schatz internal Affairs Complaint my 1st against an officer and Tommy Moran Who I alerted that Eugene is a bad cop and the next day I received a homophobic bashing email about me being a bad artist. I want to believe that Tom was a good guy and had nothing to do with this.   Internal Affairs guilty why am I the one finding this evidence linking for cops and getting me even

https://vine.co/v/M3A9b3ehni0
Vid 4 second highlights Vine
Watch Delita Hooks remove her keys which had already hit me because they would hinder her goal to do a running punched in my left eye make me a hole in my retina
https://www.scribd.com/mobile/doc/173385168#fullscreen Delita Hooks false cross complaint I paid 15 dollars to get she walked in to 01 Precinct 2 days after me and committed yet another crime.


Cy Vance had an ADA offer NBA star Thabo slave for the day since he committed no crime but NYPD did Cy Vance protected NYPD crimes in my case too. Read about DA intern too afraid to report sexual assault...
http://www.dnainfo.com/new-york/20150107/civic-center/high-level-employee-manhattan-da-office-accused-of-sex-assault-by-inter


I have her false cross complaint and police reports including Det John Vergona lying as well as 3 reports from public member marks where he writes her clear intention to do bodily harm....

Am I the only victim to be threatened by Vergona and Delita Hooks?
POSTED BY SUZANNAH B. TROY ARTIST AT 11:01 AM