#NYPD Lt Angelo Burgo Who Lied in Police Reports Refused to answer my emails asking for badge numbers who opened my case at least 5 times and never contacted me has now contacted me for the first time on linked in. He clearly is not taking my lawsuit seriously 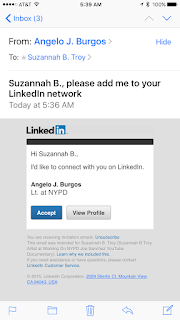 I guess he doesn't understand that I'm going to pursue justice testify every where all the way to every venue possible and testify against him and all the defendants and other NYPD officers whose names I do not even have including partners of the cops but I'm suing and top officials and Internal Affairs captains DI. I can only guess he's mocking me? What do you think since I'm suing everybody including him and he knows it.

In NY state Supreme Court I served Lt Burgos  by mail at  what I believe is his upstate home. 5:30 am I find this after all these years of his role in coercion lying in police reports never contacting me and I contacted him via email a subordinate give me his email and said email him and I did ask him for badge numbers and he couldn't be bothered just continue to lie and now after all these years he contacts me to mock me and have a good laugh that a broken system a series of broken systems are protecting police corruption wrongdoing in lying and committing crimes?

Did you think he  talked with corporate counsel who is yet to contact me and confident it's a slamdunk thrown  out because I don't think it's a slamdunk at all I think I presented a good enough lawsuit  i'm amending to add this in the Facebook page and I'm changing the header that says CCRB  did not supervise the police to internal affairs  cannot police the police.


He and everyone guilty may have a good laugh and think they're going to get away with this but besides being on all my blogs and YouTube telling the truth about their guilty wrong doings actual crimes I will testify in front of the new commission I will never let this go  I recommend not mocking me and laughing but just telling the truth and start with an apology.


I'm going to have to amend the lawsuit and include this in the lawsuit that he never would return an email request for a batch he never reached out to contact me as he lied and lied and police reports protecting police wrongdoing and now he contacts me through LinkedIn for the very first time. He has my name and address in the lawsuit my phone number he's not calling me to apologize so I gather this is a way that he is trying to get my attention?    He's trying to harm me even more  it's very cruel of him is in it?    Never contacted me when I had a hole in my retina cervical damage I'm being threatened and lied about and he knew it he saw public member Marks  police reports I have three that I submitted to the judge and each one it says that my attacker threatened me that she said she was going to slap the crap out of my ass!


Burgos  opened my  case at least five times that I submitted to the judge and you don't think in those five times that he looked at the video of me being punch the photographs medical notes the fact that my attacker signed a letter that probably Joe Tacopina wrote openly threatening me to her her NYPD fixer -  A far more serious crime then a false cross-complaint because she signed it...

https://www.scribd.com/mobile/doc/173385168#fullscreen Delita Hooks false cross complaint I paid 15 dollars to get she walked in to 01 Precinct 2 days after me and committed yet another crime.


He never contacted me one so he's having a good laugh now Confident they got away with coercion lying in police reports threatening me covering up for my attacker and a series of crime she committed as well as the police at the 1st Precinct involved in my case retaliation because they considered me a ball buster (heard from a source) they were willing to  lie police reports threatened me commit the crime of coercion -  witness tampering aggravated harassment via a third-party on their behalf which was done three months earlier courtesy of corrupt cop PO Eugene Schatz after  I left a voicemail for another Facebook friend of John Vergona's Community affairs Det Tommy Moran that NYPD PO Eugene Schatz is bad.   Was involving him using his squad car illegally to threaten me to move intimidate me and veteran vendors and artists that were protesting a 15 minute protest and he could barely get there before it was over so he illegally use the sirens he than was abusive out of line  a severely handicapped 80-year-old Korean War Vet Eric who is now dead.


Eric was extremely poor he had prostate cancer and he was the reason I went after the Mercer Hotel for their illegal parking scam using the loading and unloading his private parking with valet service while they called it the first precinct and had the veterans ticketed anyway they could the police protected their wrongdoing and harassed that's that served our Country.

NYPD Lt Burgos  has hit his face his identity from you so I don't know what he looks like he knows what I look like he's not on the Facebook page so I didn't get to see his face for the first time like cowards criminal cops Andy Dwyer and John Vergona.


I have a lot of questions about the police reports for all of them under oath and I even want to ask them if they had a good laugh because they sure sound like their status and misogynist to me they will read My guess Joe Tacopina's crime witness tampering aggravated harassment threatening a victim warning me not to come forward or he would bury the turn my tables destroy me and he called me a cunt.

Lt Burgos refused to give me Sergeant Chen's  badge number so there's no way I can track him he was mysteriously moved a few days before I went to serve everybody.


Lt Burgos  I am guessing is a sadist who's laughing taking pleasure in never contacting me lying about me and now sending me a LinkedIn invitation after refusing to answer emails requesting badge numbers.


The running punched my head as a whole bags by the violent Liar  made a hole in my retina --  norm's not a floaters in both eyes from her yanking my head repeatedly as I held my bags because I thought maybe she's gonna try and rob me next I don't know what's going on I had a glass iPad and my iPhone as well as my wallet...

My attacker violent liar Delita Hooks hurt my cervical neck and most of all they've been lying as a group and I guess he thinks it's a done deal that my lawsuit will be thrown out but I really think it's a strong lawsuit and I'm just waiting for a judge to be assigned the lawsuit and tell the judge about this and asked to amend the loss
Posted by Suzannah B. Troy artist at 5:00 AM