Tonight months after I was first assaulted -- I called Internal Affairs -- I am disconnected three times and than I get voice mail.  I leave a message if there is anyone there with integrity call me back.

I do get a call back and I make new complaints against the detectives from the First Precinct Det. Squad who took Delita Hooks false complaint and never called me just like Det John Vergona refused repeatedly to meet me in person to see the defensive wounds and damage to my eye.  To this day Det. John Vergona has not met me and lied repeatedly to me that he was going to the office to interview everybody. He never went.

I want to testify about CCRB and the NYPD any and all opportunities I want to tell what happened.

Corrupt cops let Dr. Andrew Fagelman's violent receptionist Delita Hooks get away with threatening me with bodily harm after menacing me and giving me the finger than repeatedly violently assaulting me and the day after me filing a false complaint which this video proves.  No handcuffs or arrest.
http://youtu.be/dh9TedhfthE

The corrupt cops had not problem with Delita Hooks berating me coming out from behind that enclosed counter where she sits way up front and she hurt me physically far more than the little boy in the video.

Nice -- so the NYPD arrest a 7 year old bully and handcuff him and interrogate him but a 40 year old bully who is suppose to be a professional in the medical community can threaten me with bodily harm, repeatedly assault me and I caught that beginning of the assault on video when she takes off her shoes she ran and punched me in the eye and caused a hole in my retina, hurt my neck worse than it was, kicked me in the groin but I continued to make distance and ripped out my hair

After the third assault to my body I defend myself fighting back.

Det. John Vergona must be either shockingly stupid or lazy because when he threatened with me false arrest if I did not drop the assault charges because Delita Hooks committed another serious crime and false a false cross complaint Det. John Vergona of the First Precinct asked me why did I walk by her?

Well John look and see she got out from behind the long reception desk where she sits up front and stalked and menaced me and than stood at the door as I exited violently giving me the finger.

I thought I was a safe distance away to start filming to document but she continue to move towards me even using the door she could have easily closed as she says get out and I am out.

The NYPD went over the top with the little boy even if he is a bully and the aided and abetted Delita Hooks I call the creature from Planet rage a violent power keg in my opinion.

I hope my video makes it harder for her to hurt other people because the NYPD failed to be honest and do their jobs.

The NYPD detectives that took Delita Hooks false cross complaint never contacted me and Det. John Vergona never went over to the office to interview everybody.

My MD and her partner moved out.

I had to get laser surgery to repair the hole in my eye.

I have never touched a women's hair in life but I don't think it was a first for Delita Hooks who ripped out my hair.  I grabbed hers when she would not let go.

The NYPD really can't seem to get it right.

If Wilson is a bully and a thief than it still appears they NYPD went to far holding him too long but the NYPD aided and abetted the medical receptionist who assaulted me in my opinion and it is still an open case because Internal Affairs has it. 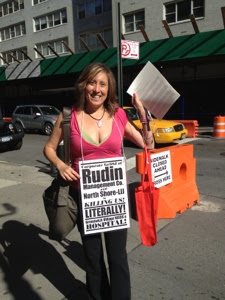 This was me before Delita Hooks at age 50 feeling beautiful and happy.

Note the very heavy bag on my shoulder.

When Delita Hooks attacked me I never put down my bags proving she is a violent creature and a bully.
I had my bag on my left arm along with the smaller bag and my arm was numb because I had 2 injections in it.

Look at the rage at her.

Look at the photo of me after.  Do you see rage? No, just disbelief. 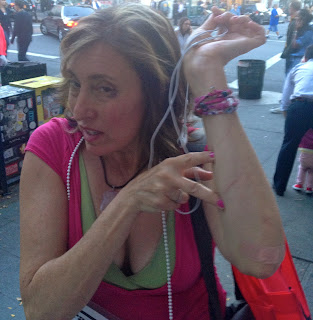 There are two defensive marks on my left arm I believe from the key on her wrist that became like a weapon.

She and the women in the video lied about me to the NYPD not knowing I had the video.

My MD immediately came to me and her medical assistant got her.

The NYPD never interviewed her and her medical assistant.

I have aged a lot and I am still in shock.  My MD demanded Dr. Fagelman fire Delita Hooks but Dr. Fagelman refused.  Delita Hooks went right back to her desk after violating my patient rights and basic human rights.   A medical office is suppose to be a safe place but the NYPD were not any better.
It changed how I view the NYPD because it wasn't one cop but a group and now I wait for Internal Affairs and they tell me they are back logged.
Gee I wonder why?

Posted by Suzannah B. Troy artist at 4:57 PM