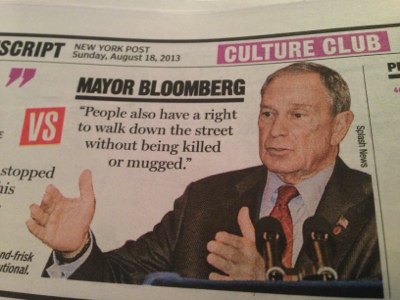 “His legacy on crime is a city where people could walk the streets free from fear, especially in some minority neighborhoods where no one thought that would be possible,” said City Hall spokesman Marc LaVorgna.    Marc LaVorgna gets paid to lie to us but we know NYPD and Internal Affairs fixing crime.
I am living it suing both right now and there have been more murders including children.
Christine Quinn and Mike Bloomberg confident they can lie and be protected.

Mike Bloomberg, Ray Kelly, Chief Campisi --- Mike Bloomberg says People have a right to walk down the street and not be mugged or killed,  how about medical care at Dr Andrew Fagemlan's where Delita Hooks savage attack left me with a hole in my retina, cervical damage and relief she didn't kill me but the NYPD and Internal Affairs helped her and the NYPD that fixed this violent crime including Det John COERCING me in to dropping charges also a crime get away with everything but murder.

His co-workers and supervisors that were involved also guilty.

Mike Bloomberg and the NYPD under Kelly violated the most New Yorker's constitutional rights and fixed crime to sell the lie crime is down.  I am living proof.

2 New York Post reporters spoke to me about doing the story.  YouTube has over 15,280 views and no one is reporting this shocking story -- the most violent attack on a medical patient EVER in the history of NYC by a receptionist office manager and not news?  Why?

Because people like Sally Goldenberg writes Mike Bloomberg is svelte at a Obesity conference when she knows along with the rest of the NY Media I am standing outside yelling 2 billion 14 million dollars the 911 Tech system doesn't work,  we have no hospital St. Vincent's.

Sally Goldenberg said to me she would see me at City Hall when I testified about the 911 Tech Corruption and Mark Carson's death, that I am demanding an investigation in to his ambulance response time.    Do the math.  Sally and her bosses and all the media are treating me the way Delita Hooks, Dr Fagelman and the NYPD and IAB treated me and treat me -- like a Jew in Nazi Germany.

More news The NY Post is killing right now like NYPD Tapes a book on Adrian Schoolcraft and
NYPD corruption not news....NYPD Ramos and PBA NYPD fixing not news hasn't been
for a long time, Mike Bloomberg, Christine Quinn and even Rose Gill Hearn's role in CityTime
and 911 not news....   Get the idea on why the NY Post won't report on me being violently assaulted
even though 2 reporters wanted to do the story.

http://mayorbloombergkingofnewyork.blogspot.com/2013/08/nypd-jose-ramos-mayor-bloomberg-ray.html?m=1
PLEASE LISTEN TO THIS TAPE AND HEAR DEPUTY CHIEF MARINO FOR YOURSELF!!!!!!Listen to this and learn why the DA refused to put this in front of a grand jury -- because it was a sure indictment.
http://www.thisamericanlife.org/radio-archives/episode/414/right-to-remain-silent?act=2#play
(starts about 17:50 minutes in to the podcast.)

This interview AMAZING AND VERY DISTURBING!!!!!!!!!!!!!!!   Listen to the part about down grading rape -- they even have on tape the NYPD raiding his home with SWAT team and tasers."

http://www.youtube.com/watch?v=dh9TedhfthE  15,185 views
The Jodi Arias of medical reception desks -- the NYPD and IAB helped her get away with everything but murder.  To date I hear she still blames me.  The NYPD sealed her false cross complaint.  I am getting it unsealed and just got the number of her false cross complaint so now I can get her false criminal report that the NYPD fixed along with IAB and buried.

Posted by Suzannah B. Troy artist at 9:48 AM

Email ThisBlogThis!Share to TwitterShare to FacebookShare to Pinterest
Labels: Mayor Bloomberg Stop and Frisks Violates Rights What about my right to get medical care and not get punched by Dr Andrew Fagelman's Violent Receptionist aka "Delite" NYPD IAB Fixed Crimes Coercion